Posted on March 3, 2015 by jingsandthings

March, it is said, comes in like a lion and goes out like a lamb. Its entrance this year has lived up to the first part of that, the weather being mixed with bursts of sun through clouds, followed by rain and snow flurries, with a wind from the Arctic that nips like pincers.

My feelings recently have matched the weather. Initially I felt a glow from completing another short story. Since attending a series of workshops some time ago on writing your life, there has been a long hibernation period. Then, suddenly, a breakthrough came when a few of us were discussing online our new railway in the Borders. The Waverley line as it was called after Walter Scot’s novels, was closed in the late 1960s when, in an effort by the UK government to save money, many railway lines were closed. Now, forty five years later, the track has been relaid and the new line opens to the public in September when the Borders will once again be connected by rail to Edinburgh and beyond.

The suggestion was made that Borders Writers’ Forum should, in some way, mark the reopening of the line, with members writing about their railway experiences, whether here in the Borders or elsewhere in the world. We’re still working out what form our celebration of the reopening will take, but the lock gates opened as an idea came to me, and I drew on my past for my story. Since then I’ve become rather obsessed with stories based on my past, finding it a rich source of inspiration.

Where railways used to run

As I pound the keyboard I’ve been amazed at the clarity with which I can recall certain events, seeing whatever I’m describing clearly in my mind, remembering its feel, smell, sound – all dredged from some dusty corner of my mind, and with the cobwebs blown off, my memories add interest, imagery and authenticity to my writing. Often though, I have no recollection of other events recalled by my husband, or if I do the mental image is often sketchy, or completely different from his version. Isn’t it weird how we remember things differently, different aspects appealing to us, and these lodging in the brain, almost as if we had attended different events. 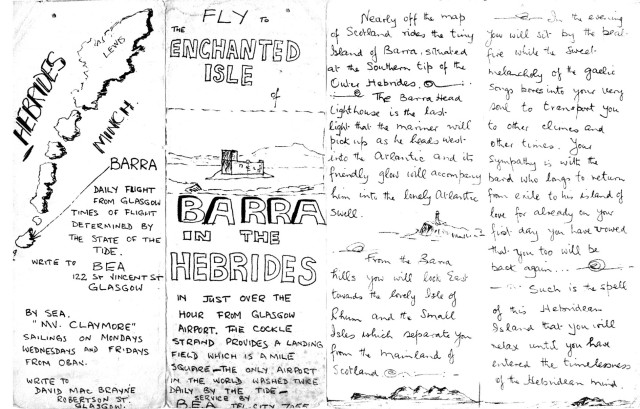 The memories of a long ago trip to Barra in the Outer Hebrides, where we were given this leaflet, prompted me to write about the experience in both a short story and my novel, ‘In the wake of the Coup’.

A railway story under my belt, I plunged in again to see what else might surface from the goodie bag of memory. A fair amount it seems, though during the past week or so other work has dragged my mind elsewhere. But that’s been good too as I’m doing the layouts for a couple of books – one a book of poems inspired by the history and landscape of the Borders, the other about the challenges and satisfactions of climbing the seven highest peaks in the world’s seven continents, complete with some stunning photographs. More later, so pin back yer lugs, or perhaps pin open yer een would be more appropriate.

Bridge over the Tweed near Yair, in the Scottish Borders 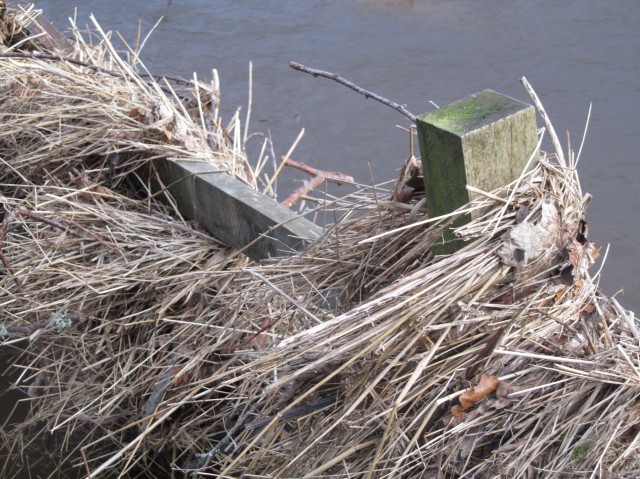 One of those books (I’ll leave you to decide which!) was the reason I braved the snell wind at the weekend to grab a few photographs. Spring may still be snuggling under the winter duvet but even monochrome hills, bridges and water have a sense of drama.

And when the sun fleetingly shafts across the hill opposite you, dragging a paintbrush of yellow ochre across it, the sight can be as magical as any tropical paradise (apart from the blasted wind, of course), or great work of art.

A flick of gold amidst bronze.

Spirits raised, spirits dampened. We passed High Sunderland, the one time studio of textile designer, and painter, Bernat Klein whose fabrics were, for a heady period, all the rage on the fashion catwalks of Paris and Milan.

Built in 1972, and described as late Modernist, the studio was designed by Peter Womersley, an internationally renowned Borders based architect who was greatly influenced by Frank Lloyd Wright’s masterpiece, Fallingwater, in southwest Pennsylvania’s Laurel Highlands. Like Fallingwater, Womersley’s building is set amongst trees, though in woodland near Selkirk rather than built over a waterfall. High Sunderland became host to many national and international visitors, and both it and Klein’s house, built nearby fifteen years earlier, are still regarded as amongst the most influential buildings in Scotland of their era. 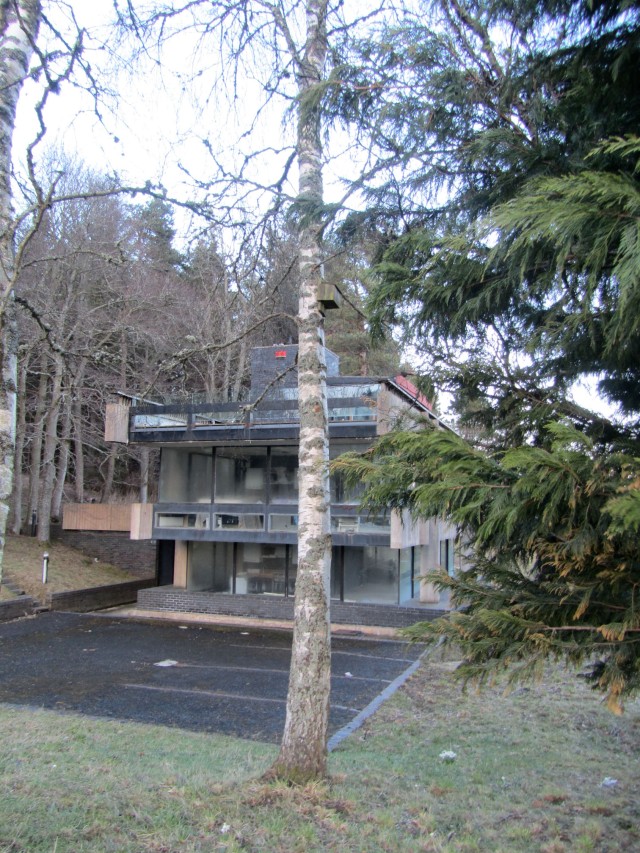 Side view of studio.

Sadly, the building has now lain empty for many years, the current owner supposedly undertaking restoration and conversion work, though it looks much the same as it did the last time we saw it a year and more ago, with the Scottish weather searching out weaknesses and playing havoc with the structure. Such a sorry state for a building with such a wonderful modern history and an undisputed international flavour.

Neglect and Scottish winters are taking their toll on this important building.

Maybe High Sunderland can inspire me to write another short story using it as the setting.

Or maybe it will drive me to campaign vigorously for its restoration.

I am me. What do I like? Colour Shapes Textures Paintings, photographs, sculptures, woven tapestries, wonderful materials. The love of materials probably comes from my father who was a textile buyer, and I grew up hearing the names of mills and manufacturers which sounded magical and enticing. Glass in all its soft and vibrant colours and flowing shapes, even sixties glass which makes its own proud statement. A book I can immerse myself in. Meals with family or friends with lots of chat and laughter (and probably a bottle or two of wine). The occasional trip abroad to experience the sights, sounds, food, conversation, quality of light and warmth of other countries. To revel in differences and be amazed by similarities. I like to create and to experience, to try and to achieve. And then there are words – read, heard, written at my keyboard, or scrawled on sticky notes, or along the edges of dog-eared supermarket receipts excavated from the unexplored nooks of my handbag. What do I dislike? Cold Snow Bad design Fast food Condescension
View all posts by jingsandthings →
This entry was posted in Arts in Scotland, Historical nuggets, Places of interest and tagged Bernat Klein, Frank Lloyd Wright, High Sunderland, Peter Womersley, Scottish Borders, Waverley Line, Yair. Bookmark the permalink.