At the last rehearsal the soundscape was added to the action. No gentle bird twitter, or soft play of breeze, no background music or muted voices from television. We’ve gone for the full-throated, ear-dinging bang. BANG!

Over the weeks hard work has seen scripts discarded, and that has liberated actions and reactions, expressions and interplay. With performances looming Director Kath is in getting-it-right mode, tweaking mode. Part of a scene is done, redone, done again, and yet a further time for changes to sink in, become natural.

The shortening time till performances doesn’t seem to faze the cast. They’ve become comfortable in their new skins and find time to joke using lines from the play, tease one another character to character, or character to actor. Borders Banter seems a very appropriate name.

The sound of a car scrunching across gravel sends a tingle of delight down my spine, not sure why, perhaps because it’s the first sound that Anthony has introduced. Anyone watching my face must have wondered why I was grinning like a fool. But this is a big event for me. This, like the recorder music and voices added a couple of weeks ago, is another aspect of the words-typed-on-computer-screen to real-live-action drama journey. This sound brings another part of my story to life, adds flesh to it.

My smiling crunching sound Elsie, David, Tom and Andy took in their stride. It added sense to the words they had uttered for months. It was the bangs that disconcerted, sent words flying, substituted genuine expressions of surprise for the carefully crafted ones of the play. They knew they were coming, over the months of rehearsals someone usually uttered a few bangs for effect. But the genuine tank article left them speechless. Then we all dissolved in giggles.

The bangs part was acted again, and again, and…until bangs, dialogue and actions melded. Another milestone.

Oliver who wrote The Gap, the other play in our double bill, and I are pushing ahead on the publicity front, intent on getting as many people to our venues as possible. After all the effort and hard work by our casts, Kath and everyone else, we want to ensure they are rewarded by good audiences. 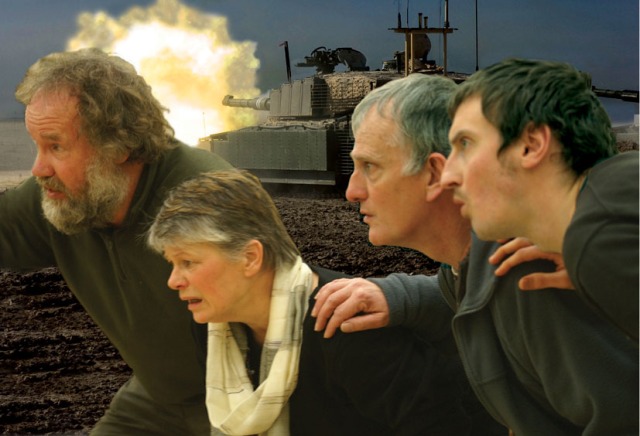 See them rats – beside the hedge at the army base. Bang!

See them rats is part of a double bill Borders Banter being performed by Odd Productions along with The Gap by Oliver Eade.

Catch the Borders Banter performances at –