Posted on February 13, 2016 by jingsandthings

February 14th. St Valentine’s Day. But who was St Valentine and why do we celebrate it as a lovers’ day with red hearts, roses and sloppy cards?

St Valentine was a Catholic saint, or according to some sources one of two or three, all martyred, one of whom is said to have sent a letter to his loved one (his jailor’s daughter) from his Roman prison and signed it from your Valentine.

The pagan festival of Lupercalia was celebrated between 13th and 15th February. Lupercalia was a fertility festival dedicated to Faunus, Roman god of agriculture, as well as to Romulus and Remus, founders of Rome who were supposedly cared for by a she wolf or lupa. Priests would gather in the cave where Romulus and Remus were thought to have stayed with the wolf and sacrifice a goat for fertility and a dog for purification. The hide of the goat was then cut into strips and dipped in sacrificial blood (where our Valentine red comes from?). Priests then took the strips and slapped women, who welcomed this as an assurance of their fertility in the year ahead, and the success of crops on which the population relied for food. Later the women’s names would be drawn from an urn, men choosing a woman with whom they would pair for a year –Roman society was rather permissive – or perhaps marry. 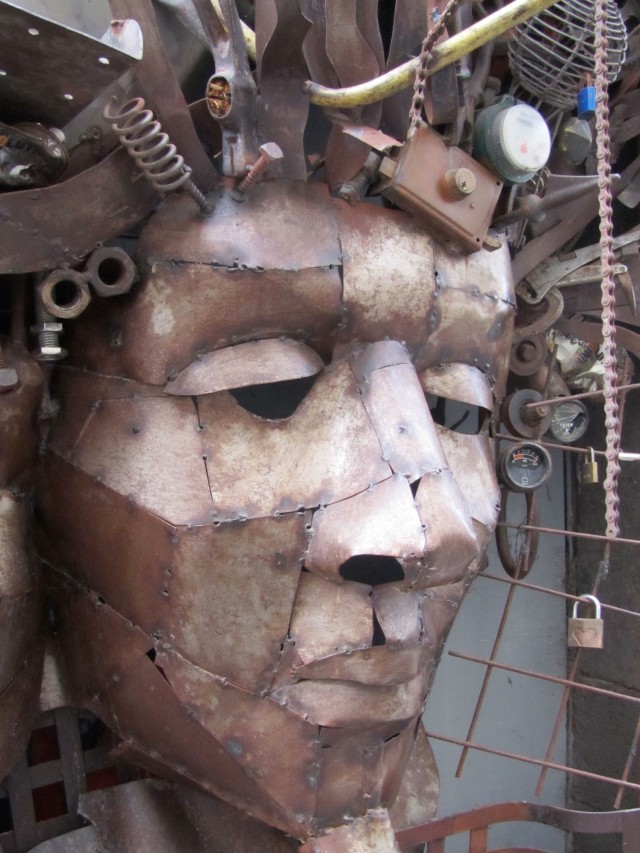 Around the fifth century the church determined to Christianise the feast, so deemed the mid February day a day in celebration of Saint Valentine.

In France by the fifteenth century, the 14th of February was a day celebrating romance and love with banquets and revelry. While in England, Chaucer seemingly referred to it in one of his poems, linking it with love. Shakespeare mentions it in Hamlet with Ophelia saying To-morrow is Saint Valentine’s day. 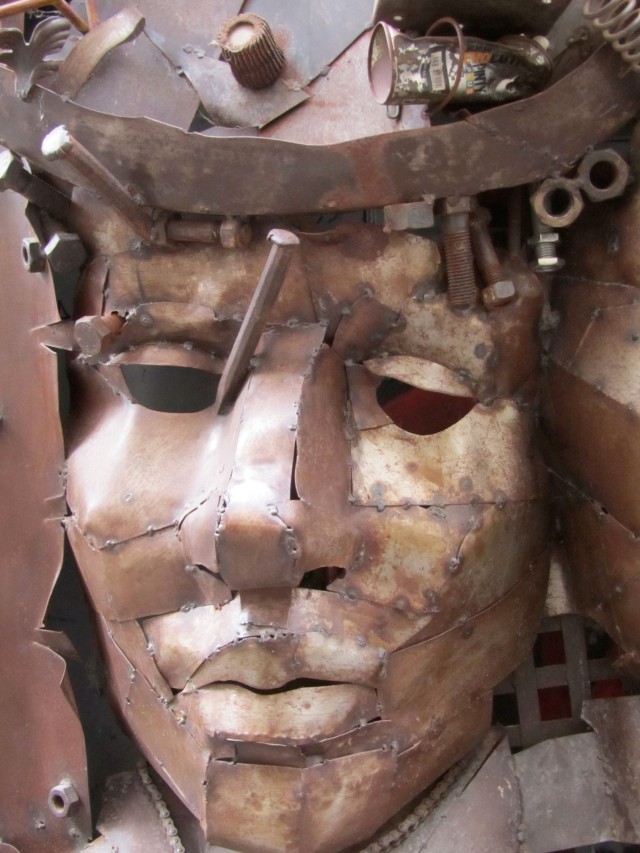 Although the day began to be celebrated around the seventeenth century, it wasn’t until the late eighteenth, with advances in printing and the introduction of the Penny Post, that friends began to exchange presents or notes decorated with flowers, love knots, lines of poetry, embroidery and frills of lace (though without any of the beating red hearts that feature today), first hand-made then sending one of the printed cards coming into vogue. And the fashion has grown since then.

No red hearts or roses for me today either. Instead I’m going with images of a sculpture of two people that I found decorating a wall in a street of Funchal’s old town. The sculpture is made of ‘found items’ of scrap metal. For me it tells a story of all the traits, feelings and emotions – caged, easy-going, difficult, honest, creative, delightful, happy, sad, positive, negative, complex and intertwining – that make up a person. And when two people come together the characteristics of each need to find a satisfactory response in the other, slotting together to make the meshing and compromises required into a worthy relationship. That, for me is the story of romance. 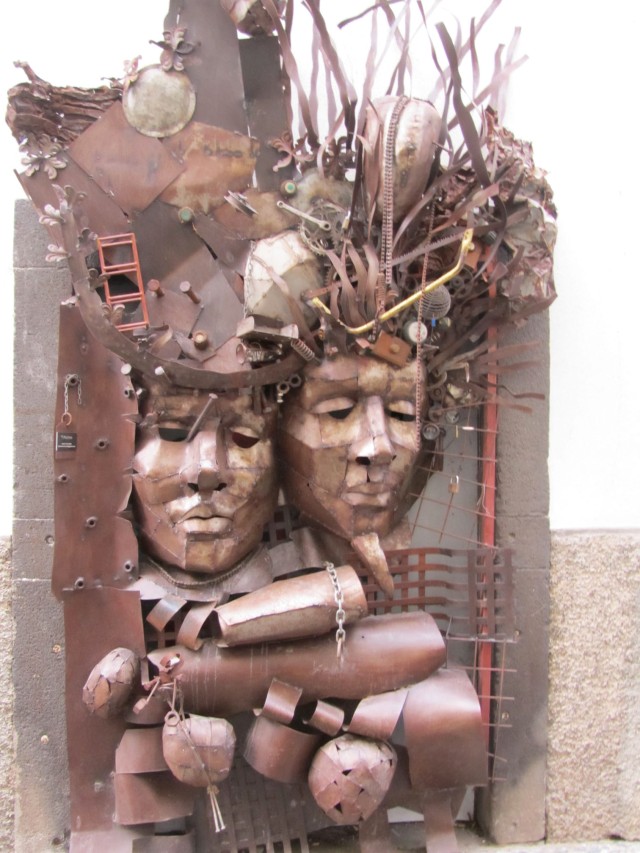 St Valentine’s Day has been shaped from a past of conflict, clashes of cultures and beliefs, and natural and manmade troubles. But it was also a past in which people strove to find something good, brief or enduring relationships of love and harmony rather than brutality. The sculpture of two people is a mishmash of shapes, chains, bindings, sharp angles, gentle curves, constructed from pieces of implements and tools that speak of other purposes, other perhaps harsher lives, yet they too have been moulded into an image of togetherness, at one with one another. To me that seems appropriate to the day. 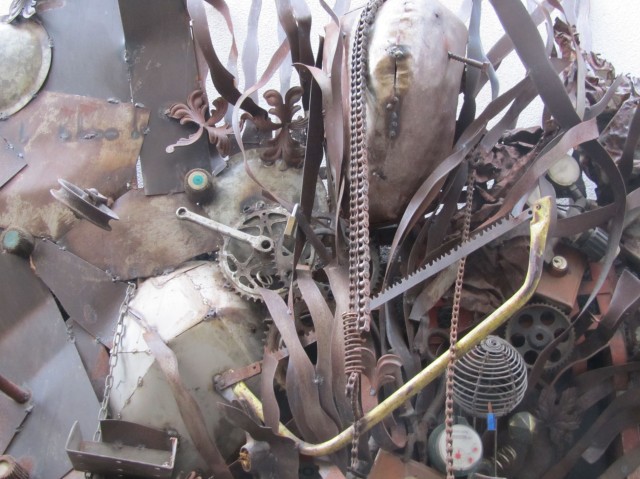 So on February 14th cherish those near and dear to you however long or short your relationship and, in a world that’s become increasingly fractious, celebrate your good fortune.

I am me. What do I like? Colour Shapes Textures Paintings, photographs, sculptures, woven tapestries, wonderful materials. The love of materials probably comes from my father who was a textile buyer, and I grew up hearing the names of mills and manufacturers which sounded magical and enticing. Glass in all its soft and vibrant colours and flowing shapes, even sixties glass which makes its own proud statement. A book I can immerse myself in. Meals with family or friends with lots of chat and laughter (and probably a bottle or two of wine). The occasional trip abroad to experience the sights, sounds, food, conversation, quality of light and warmth of other countries. To revel in differences and be amazed by similarities. I like to create and to experience, to try and to achieve. And then there are words – read, heard, written at my keyboard, or scrawled on sticky notes, or along the edges of dog-eared supermarket receipts excavated from the unexplored nooks of my handbag. What do I dislike? Cold Snow Bad design Fast food Condescension
View all posts by jingsandthings →
This entry was posted in Events of interest, Historical nuggets, People of interest, Places of interest, Uncategorized and tagged Chaucer, Funchal, harmony, Lupercalia, romance, sculpture, Shakespeare, St Valentine's day. Bookmark the permalink.