You too can have one

Posted on February 2, 2016 by jingsandthings

We’re all well aware of logos, trademarks, advertising gimmicks and slogans used to promote companies, organisations and goods. We’re bombarded with them wherever we look. Some are trusted household names, a few may carry disliked baggage, others may be brash new kids on the block. But life without them is difficult to imagine.

A few writers and actors have even been made brands with companies under their own names.

Impressive sign for The Witchery restaurant in Edinburgh’s Royal Mile.

But what many of us don’t possess, unless of aristocratic stock, is our own historic brand, our own ancient trademark (though in Scotland royal burghs and cities proudly own them) – a Coat of Arms.

A shop selling souvenir Coats of  Arms in Edinburgh Castle.

A Coat of Arms is a heraldic design that, in Europe, applied to a family and can be inherited, new generation from the previous. They originate from mediaeval times when knights wore them on their surcoat, or tabard, to identify the wearer.

Coats of Arms in the Street of the Knights in Rhodes old town. 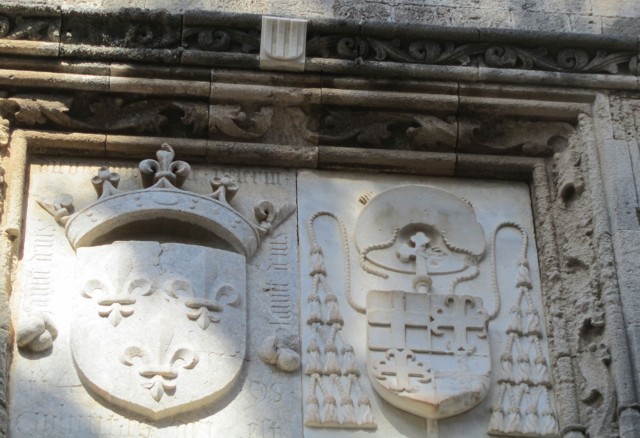 The Knights were into their Coats of Arms big time.

The Bayeux Tapestry of the 11th century depicts coats of arms, crosses on shields, providing early evidence of their use. They came into general use a century later when feudal lords and knights in battle displayed them. It wasn’t long before the newfangled fad became popular amongst others, a bit of one-upmanship, and soon became a kind of logo for families in the European elite.

Stone Coats of Arms in the former Auberge de France in the Street of the Knights. 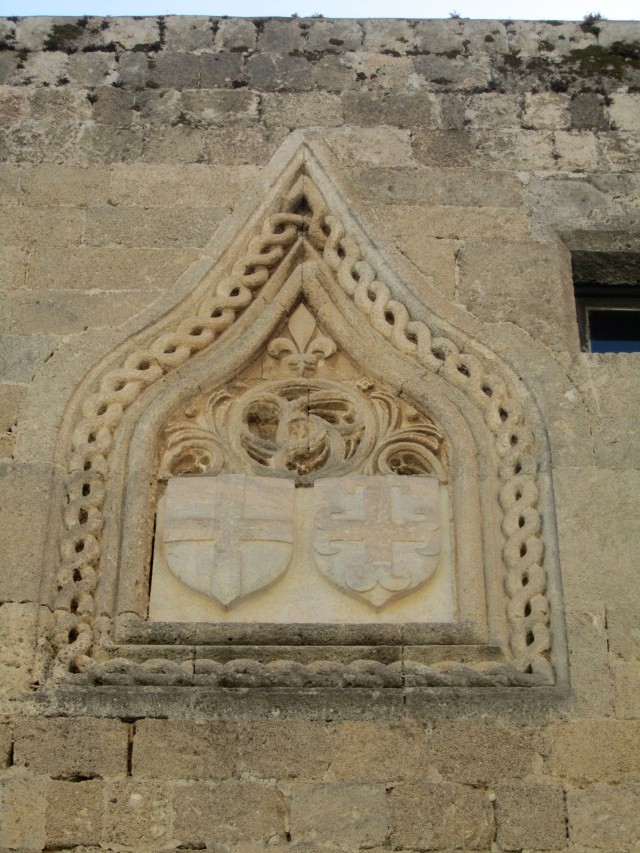 The French Consulate also has an imposting Coat of Arms.

Wives and daughters were of course not in the same league, so the arms had to be changed in some way, often a change of colour, to indicate women were not the full deal when it came to status.

In Scotland coats of arms apply to a person rather than family, so can be passed from family head to succeeding family head, only one at a time using it. 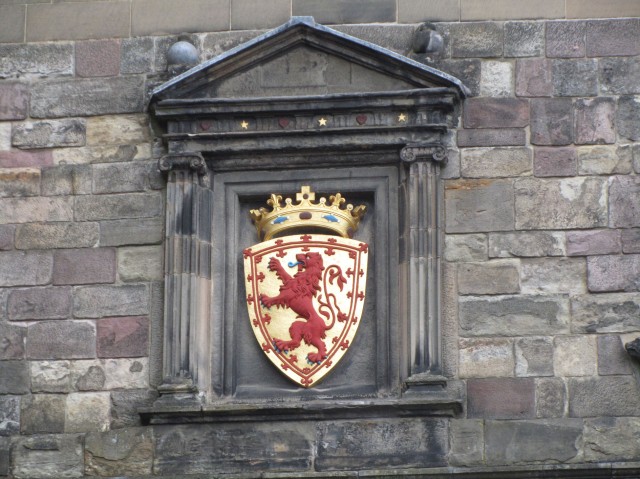 Coat of Arms in Edinburgh Castle.

Coats of Arms for sale in Edinburgh Castle. These are only souvenirs – lovely to have for those who want them, but are not legitimate unless they have gone through the correct channels.

Although coats of arms can now be bought free on the internet, in Scotland the Lord Lyon King of Arms strictly enforces all matters referring to Coats of Arms and things heraldic. His office dates from the 14th century, although it may incorporate the much older Celtic office of royal Seanchaidh or of King’s Poet who had responsibility for keeping the royal genealogy (that must have proved tricky at times!) and attending the King’s crowning. Today such matters are still taken seriously with the gold embroidered tunic-wearing Lord being Judge of the Court of the Lord Lyon.

Coats of Arms provided are not for use but for hanging on the wall, presumably to impress friends and neighbours. 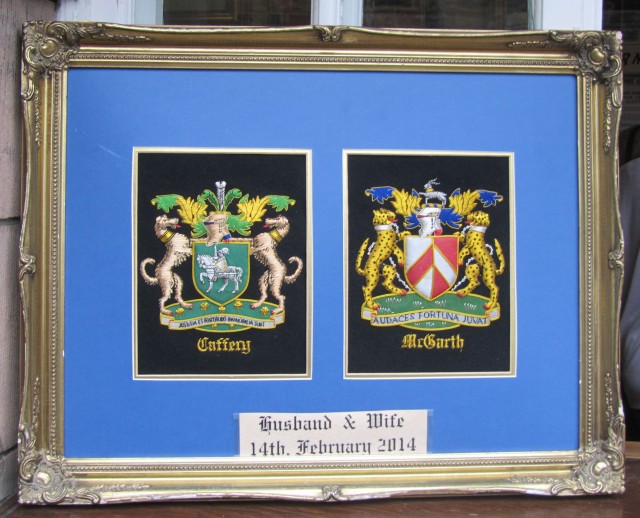 You can opt for a double act with you and your husband/wife/partner having one also. Doubles the impression made on friends presumably.

On ceremonial occasions the Lord Lyon, who is responsible for all State Ceremonial in Scotland, is accompanied by Her Majesty’s Officers of Arms – at present (their titles are derived from place names where powerful lords held sway) Rothesay Herald, Snawdoun Herald (title derived from part of Stirling Castle) and Marchmont Herald, Ormond Pursuivant (from Ormond or Avoch Castle on the Black Isle), Dingwall Pursuivant and Unicorn Pursuivant. In heraldry the unicorn is known as the symbol of Scotland and two unicorns supported the royal arms of the King of Scots. Since the Scotland/England union of 1707, the UK royal arms have been supported by a unicorn along with an English lion. I had to consult the dictionary for the Pursuivant bit, it seems they are juniors who may follow in the footsteps of one of the Heralds.

You don’t have to confine your logo/trademark/Arms to a painted, printed or sewn panel. Now that rather appeals!

A 1592 Act of the Scottish Parliament gave the Lord Lyon responsibility for prosecuting as a criminal offence anyone who uses unauthorised Arms, and in 1672 a further Act authorised the creation of the Public Register of All Arms and Bearings in Scotland. This Register is maintained by the Lyon Clerk and Keeper of the Records and contains an official copy of every Coat of Arms granted in Scotland since 1672 right up to the present.

So if it’s more than an interesting souvenir you crave, then the Lord Lyon is the man to contact – http://www.lyon-court.com. 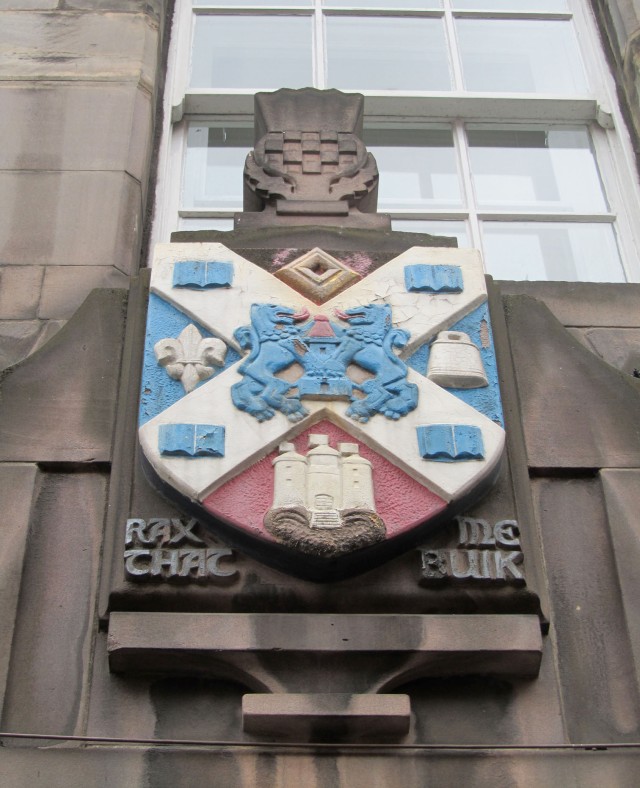 The Coat of Arms above the entrance door to the administrative office of the National Library of Scotland in the Royal Mile, Edinburgh.

I am me. What do I like? Colour Shapes Textures Paintings, photographs, sculptures, woven tapestries, wonderful materials. The love of materials probably comes from my father who was a textile buyer, and I grew up hearing the names of mills and manufacturers which sounded magical and enticing. Glass in all its soft and vibrant colours and flowing shapes, even sixties glass which makes its own proud statement. A book I can immerse myself in. Meals with family or friends with lots of chat and laughter (and probably a bottle or two of wine). The occasional trip abroad to experience the sights, sounds, food, conversation, quality of light and warmth of other countries. To revel in differences and be amazed by similarities. I like to create and to experience, to try and to achieve. And then there are words – read, heard, written at my keyboard, or scrawled on sticky notes, or along the edges of dog-eared supermarket receipts excavated from the unexplored nooks of my handbag. What do I dislike? Cold Snow Bad design Fast food Condescension
View all posts by jingsandthings →
This entry was posted in Historical nuggets, Uncategorized and tagged Augerge de France, Coats of Arms, Edinburgh, Edinburgh Castle, Lord Lyon, Rhodes, Royal Mile, Scottish Parliament, Street of the Knights. Bookmark the permalink.

6 Responses to You too can have one