Posted on December 30, 2015 by jingsandthings

It was a great deal – the reason we went to Rhodes for two weeks rather than, one as the cost was little more. We didn’t question why, vaguely thinking it was due to the lateness of the season, a quieter interlude before ramping up again for Christmas.

During the first week we merely enjoyed being there. But then we began to hear stories from staff of the hotel closing down at the end of the month. End of the summer season they said. They talked of longed-for holidays after working hard all through the summer. After that they would work on the land, pick olives, see what else became available, spin their money out and hope they could find another job to see them through to May when the hotel opened again. 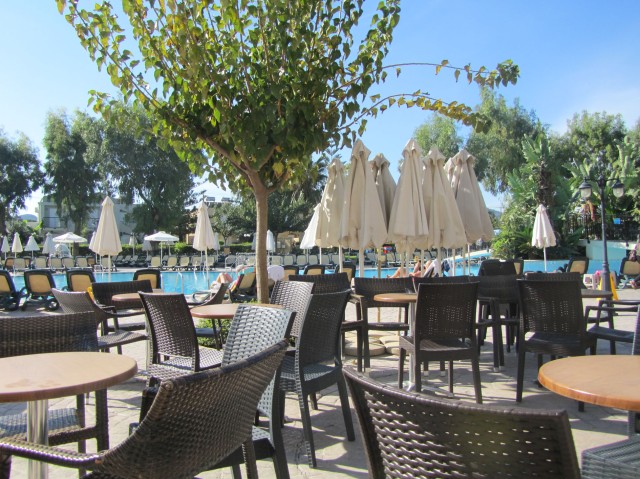 Empty chairs by the pool – one of the signs the hotel was closing.

The sky was blue, the sun beat down, we couldn’t believe the hotel was closing. Surely it didn’t make economic sense. Turned out it wasn’t just our hotel that shut up shop for the winter. In Rhodes most hotels and businesses seemed to close.

Into the second week and there were decidedly less people in the hotel than the previous week. Each day saw busloads leave, and the number of tables used in the dining room reduced to a small section rather than two large areas. The entertainment staff left. For a few days little had been offered as insufficient visitors wanted to take part in the quizzes or bingo.

Even the outside bar is empty, no customers queuing for beers or cocktails (yes, these were drunk all day long).

We watched from our balcony as the umbrellas and sunbeds on the beach were gathered together, and the makeshift huts from where sunbathers could buy water or soft drinks, or hire jet skis or arrange paragliding, were dismantled, their tables, chairs and paraphernalia loaded, after much discussion and extravagant hand gestures, onto a succession of cars, vans and trucks. Looked as if favours had been called in from friends to help move businesses to winter storage quarters. 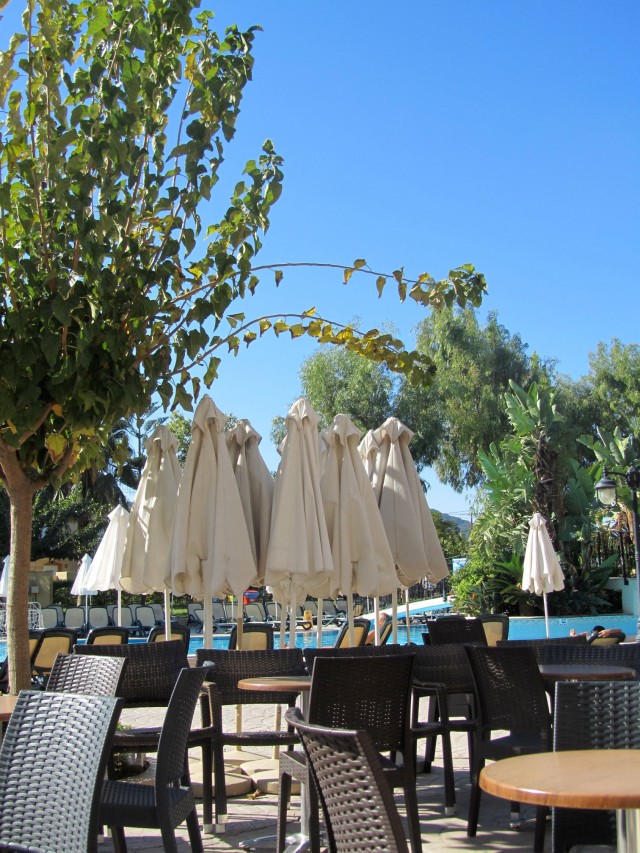 With fewer and fewer people around the pool, stacks of sunbeds grew beside a fence bordering the road. Umbrellas stood together like stands of albino trees. The entertainment having finished, a crew of electricians sauntered in to dismantle the lights for the stage and the sound equipment. It all seemed quite surreal, watching the pack-up as we lounged in our chairs, wondering again what this did to the economy.

It was a bit like sunbathing in a ghost town.

When we broached the subject we were told of much colder weather, bad storms when ferries didn’t run to other islands. One afternoon and evening we had experienced one of their thunderstorms, and yes the rain pelted down. But coming from Scotland where our weather year round is unpredictable, and where cold weather, rain, storms, frost, sleet and snow are normal for winter, we weren’t totally convinced by the arguments. If Scotland can have a vibrant winter programme of events with visitors flocking to see in the New Year in Edinburgh (75,000 visitors flew in this week) and other cities and towns, we thought perhaps Rhodes, the rest of Greece, might give it a whirl. 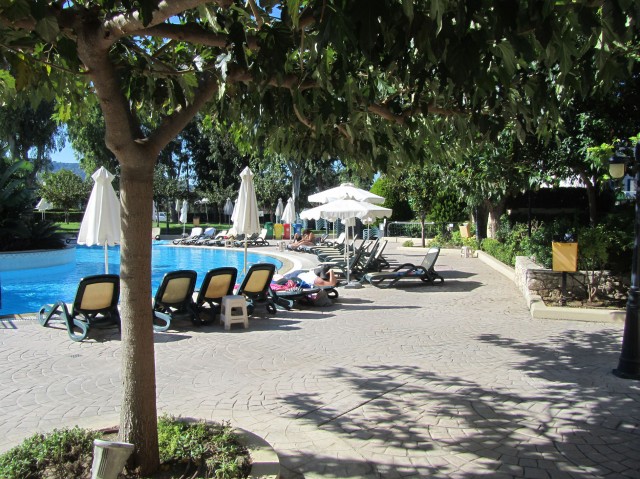 Only shadows, no sun-worshipers apart from a handful of us.

As we watched vans coming and going, delivering foodstuffs, cleaning materials, clean laundry, all the materials necessary for keeping a hotel for 800 people going, it brought home to us that not only would the hotel staff be jobless so would many of those working for those companies. One of the two supermarkets beside the hotel packed up and pulled down the shutters, as did the other businesses beside it.

Still no people. We’re beginning to think we’re the last ones left!

Rhodes was saying goodbye to the world, closing down, wholesale, for six months, until the beginning of May. Tour operators withdraw, flights end, and the island economy must surely fall off a cliff. Shops in Rhodes old town close because they have no customers. The place must become a ghost town, returned to the Knights for their ghosts to roam the streets unhindered, pining for the good old days before they were kicked out and had to start anew in Malta. 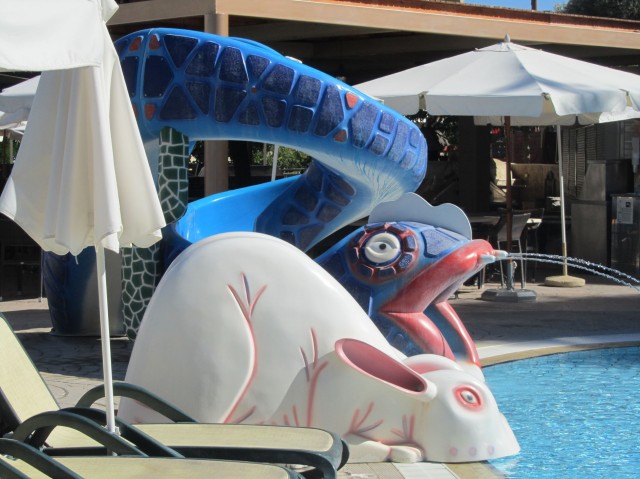 They could almost be depressed and screaming at the lack of children to use them.

None of this affected our enjoyment. For us and a handful of guests everything (bar the entertainment) went on as before. We rather enjoyed the peace of the place, the quietness without the screeches of water polo players, and the whoops of children as they jumped into the water. We watched mesmerised. The close down provided us with a different form of entertainment.

Harvesting sunbeds. Each day the piles of plastic grew higher.

As no guests were coming in after us we were able to retain our room until we left at six in the evening. And as our bus drove off to the airport, the lights in the hotel’s reception went out.

No bathers to cause a ripple on the pool leaving it to reflect trees and sky.

I am me. What do I like? Colour Shapes Textures Paintings, photographs, sculptures, woven tapestries, wonderful materials. The love of materials probably comes from my father who was a textile buyer, and I grew up hearing the names of mills and manufacturers which sounded magical and enticing. Glass in all its soft and vibrant colours and flowing shapes, even sixties glass which makes its own proud statement. A book I can immerse myself in. Meals with family or friends with lots of chat and laughter (and probably a bottle or two of wine). The occasional trip abroad to experience the sights, sounds, food, conversation, quality of light and warmth of other countries. To revel in differences and be amazed by similarities. I like to create and to experience, to try and to achieve. And then there are words – read, heard, written at my keyboard, or scrawled on sticky notes, or along the edges of dog-eared supermarket receipts excavated from the unexplored nooks of my handbag. What do I dislike? Cold Snow Bad design Fast food Condescension
View all posts by jingsandthings →
This entry was posted in Places of interest and tagged 000 visitors, 75, closing down, Edinburgh, Rhodes. Bookmark the permalink.