Posted on November 3, 2015 by jingsandthings

It was dark when we arrived, and as our bus whisked us from airport to hotel all we saw were the lit windows of shops and their tarpaulin-covered extensions where racks and rails of colourful goods ranged across pavements like chess pieces on a board.

Wonder why people who live in warm climates seem less afraid of using bright colours that people in cooler places?

The first real taste of our holiday came when after our meal we wandered outside to explore the hotel grounds. As we stepped through the automatic doors, warmth hit us, as did the sounds from the outdoor entertainment area with its stage and bar, people wearing short-sleeved t-shirts or floaty dresses and flip-flops relaxing in chairs. Children, freed from school and normal routine, ran around or created their own performances with loud voices and exaggerated gestures. Even at the height of summer, evenings in Scotland are very rarely this balmy, and the dampness of dew sends us scurrying for jackets. So different here!

My camera struggled with this because of lack of light but it does convey some of the atmosphere.

The pool at night – hardly a ripple as evenings were so still.

We were in the modern tourism-by-the-sea part of Ialyssos, one of the three major cities of Rhodes founded in the sixth century BC. Rhodes is one of the Dodecanese islands in the south-eastern Aegean known for being the sunniest places in Greece, as well as for their medieval castles, Byzantine churches, and ancient archaeological sites. Even in October the weather remained in the mid to high twenties, with a drop of only a few degrees in the evenings. Hence the outdoor entertainment.

It all seemed idyllic until we tried to sleep. Even a light sheet over us made us sticky, bedding becoming a second skin unless we shed it. A few evenings and lively patches of mosquito bites later we sussed out how to operate the air conditioning which made sleeping infinitely easier and more pleasant. 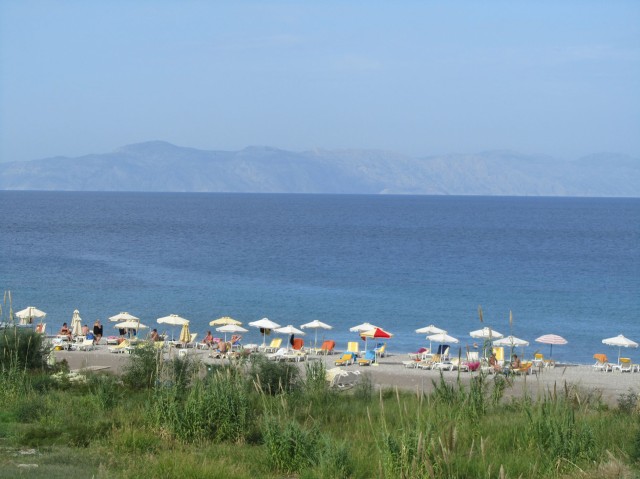 Most people sat around the pool with its easy access to bar and toilets rather than venturing onto the pebble beech. Turkey can be clearly seen across the water.

On our first morning we realised not only did our balcony boast a view of the beach but also the not far distant Turkish coast with numerous cruise ships like floating islands passing regularly, Rhodes town, which we could partly see on the opposite headland of the bay, being a favourite stopping place.

On the headland at the other side of the bay can be seen the hotels of Rhodes town. There are supposedly regular buses but we were warned about their reliability. Most visitors used taxis to go to Rhodes.

The Dodecanese have a colourful past – part of the Byzantine Empire, then in the 14th century, taken over by the Knights of St John who made Rhodes into their stronghold, before being ousted by Suleiman the Magnificent and fleeing to Malta. As part of the Ottoman Empire the Dodecanese paid a special tax in return for autonomous status and freedom from interference and harassment. When Greek independence was recognised in 1830, although most Dodecanese still considered themselves Greek, the islands were not included in the new country.

Ruins at Kamiros, one of the ancient city states of Rhodes.

After the outbreak of the Italian-Turkish war over Libya the islands declared themselves an independent state, in 1912 becoming the Federation of the Dodecanese Islands. That was when Italy invaded, its eyes fixed on the fortress of Rhodes to control communications between Turkey and Libya. 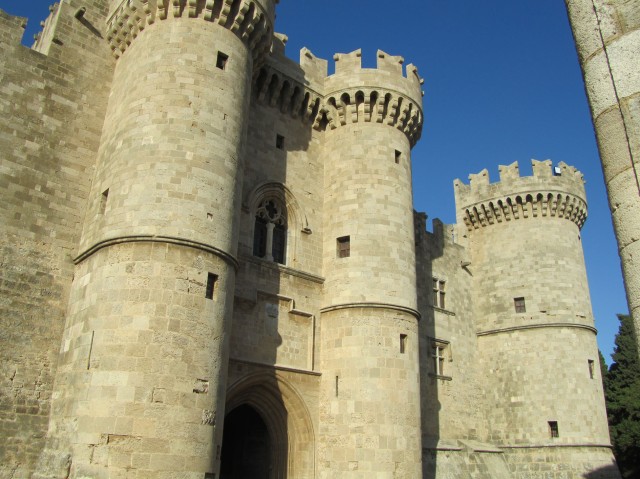 The Palace of the Grand Masters is, according to my guidebook, a reconstruction of a palace built by Helion de Villeneuve on the site of an ancient temple to the sun god Helios. The Turks used it as a prison, for stabling horses, and as a gunpowder store which exploded when a minaret was struck by lightening in 1856. When the Italians moved it it was reconstructed as a summer home for Victor Emmanuel 111, and used by Mussolini. 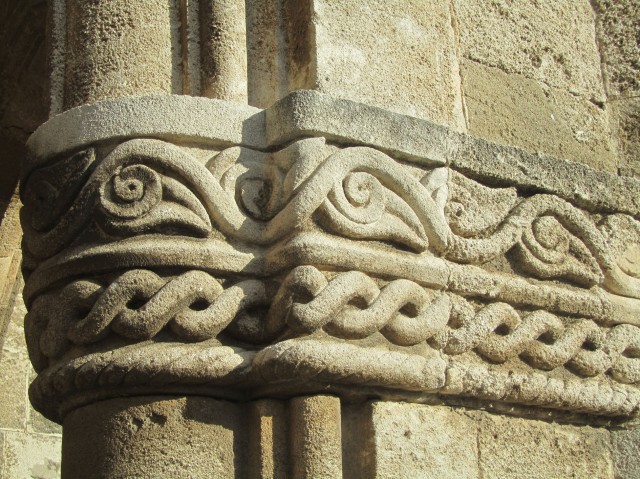 After the First World War Italy formally annexed the Dodecanese with Mussolini embarking on a programme of Italianisation. Roads, schools and hospitals were constructed, and the Castle of the Grand Master was rebuilt. Mussolini is said to have stayed there, many of the pieces of furniture and light fittings having an Italian feel to their design.

During World War 2 the strategic positions of the islands saw the Dodecanese being used as bases by both sides of the conflict. However, in the aftermath they became a British military protectorate before being formally united with Greece in 1947, less than seventy years ago.

Italian (?) head amongst the Kamiros ruins.

No doubt the reason why a fellow visitor emphatically informed me that the Dodecanese are not Greece, certainly not typical of Greece. I can understand that, for although we may think of them as Greek, thousands of years of cultures created and pieced together by different regimes have left a multi-faceted historical mosaic fascinating in its intricacy.

So while we enjoyed sitting reading by the pool and stuffing ourselves with Greek salads, feta cheese and olives washed down by local wines and brandy, we also took in some of the sights that peeled away the idols of modern day tourism to expose the jigsawed inputs of eras, regimes and customs that have shaped the Dodecanese into what they are today.

One of the mosaics in the floors of the Palace of the Grand Masters. There was a lack of interpretation to inform visitors about the Palace. Some mosaics were marked as having been brought from the island of Kos during the Italian renovations, but this was not one of them.

I am me. What do I like? Colour Shapes Textures Paintings, photographs, sculptures, woven tapestries, wonderful materials. The love of materials probably comes from my father who was a textile buyer, and I grew up hearing the names of mills and manufacturers which sounded magical and enticing. Glass in all its soft and vibrant colours and flowing shapes, even sixties glass which makes its own proud statement. A book I can immerse myself in. Meals with family or friends with lots of chat and laughter (and probably a bottle or two of wine). The occasional trip abroad to experience the sights, sounds, food, conversation, quality of light and warmth of other countries. To revel in differences and be amazed by similarities. I like to create and to experience, to try and to achieve. And then there are words – read, heard, written at my keyboard, or scrawled on sticky notes, or along the edges of dog-eared supermarket receipts excavated from the unexplored nooks of my handbag. What do I dislike? Cold Snow Bad design Fast food Condescension
View all posts by jingsandthings →
This entry was posted in Historical nuggets and tagged Dodecanese, Greece, Ialyssos, Kamiros, mosaics, Palace of the Grand Masters, Rhodes. Bookmark the permalink.

9 Responses to A multi-faceted historical mosaic