Jasmine has a red sports car

Posted on July 1, 2014 by jingsandthings

Sometimes I just want to get out, away from computer and books, folders and papers. Where we go (husband is usually dragged along) doesn’t much matter, as long as there is something of interest to photograph.

The Scottish Borders is criss-crossed by a network of good, but usually quiet roads, so one Sunday some weeks ago we enjoyed trundling along, enjoying the virgin greenery of trees, the rolling fields of crops — many zinging yellow with oilseed rape, and the verges dotted with colour as if impressionist paintings. Colours were heightened by the sun, and it felt so warm we even wound down the car windows. 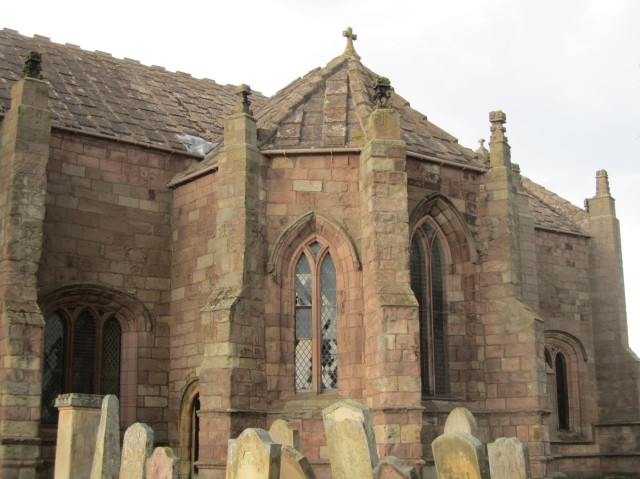 Ladykirk Church with its stone roof stands near the border between Scotland and England.

Our wanderings took us to Ladykirk with its impressive church, one of the few stone roofed churches in Scotland, built in the late 1490s when James IV of Scotland fell from his horse whilst crossing the River Tweed and believed his survival was due to the Virgin Mary.

The bridge over what would once have been the moat, and the arched entrance through the wall to Norham Castle.

A mile away on the opposite bank of the River Tweed, which forms the border between England and Scotland, we came across Norham Castle, one of the strongest of the border castles, and the one historically most often attacked by the Scots.

The ruins of Norham Castle on the opposite bank of the River Tweed.

James IV made several attacks on it too, even bringing in Mons Meg, the hefty cannon now on the esplanade of Edinburgh Castle, to bombard it. The castle fell to James shortly before the battle of Flodden at which James lost his life along with many thousands more. The conflict was brutal, the fields soaked with blood.

The history of Norham Castle.

Last year events took place on both sides of the Tweed commemorating 500 years since the battle. To me, on that Sunday, this year seemed a more apposite time to be visiting. For this year, in September, people who live in Scotland will vote in a referendum on whether Scotland should again row its own boat and regain its status as an independent nation.

I wonder how much has changed in those 500 years?

It has become the norm for political parties to treat electors as backward children who need to be fed morsels in baby bites, and only if that information is wrung out of them.

In the referendum campaign, however, it seems as if politicians are torching the electorate with words, the heavy artillery still deployed, only this time, instead of cannon balls, what’s being fired is misinformation, smears, character assassination, bluff and bluster, shouting, accusation and lies. The battle, instead of being fought on Flodden field, is taking place in the media and online, while a reasoned, more nuanced form of persuasion is usually found on websites and on Twitter, as well as on street stalls the length and breadth of Scotland, in literature and leaflets and face to face on the doorstep. Two hard fought battles 500 years apart.

Through the trees at the castle’s entrance can be seen the River Tweed, the border between Scotland and England.

While out and about that Sunday we stopped to take a few photos in Norham before driving up to the castle. I noticed a sports car parked nearby, black unfortunately, and husband wasn’t too keen to work his magic in Photoshop to transform it to red. Why red? Well, I’m working on an illustrated ebook of my latest book, The Seaweed Cage, in which a character, Jasmine, is a journalist, a single (more or less) lively lady who loves life and men. A red sports car seemed appropriate for her, so I’d set my heart on a photo.

Red must be out of fashion at present. Silver used to be the new red, now it’s black. I’ve been keeping my eyes peeled for months and seen very few — those I do see zoom past before camera has even been lifted from lap.

Now where are we going?

However, here in the little village of Norham we spotted a burnt orange coloured car with a vaguely sportly look that I thought I might have to settle for. As it was again chucking down with rain, husband offered to have a closer look. While he was off on safari the rain stopped and the sun reappeared. Back he came eventually looking mightily pleased with himself.

The orangey red thing — nah, I didn’t want that. He’d shots, lots of shots, of something much better. On his reconnaissance he’d stopped to photograph a car just as a dark red Alpha Romeo drew up beside him. He asked and was given permission to photograph it. Brilliant. Jasmine has a red sports car, and I’ll have the photo to prove it.

I am me. What do I like? Colour Shapes Textures Paintings, photographs, sculptures, woven tapestries, wonderful materials. The love of materials probably comes from my father who was a textile buyer, and I grew up hearing the names of mills and manufacturers which sounded magical and enticing. Glass in all its soft and vibrant colours and flowing shapes, even sixties glass which makes its own proud statement. A book I can immerse myself in. Meals with family or friends with lots of chat and laughter (and probably a bottle or two of wine). The occasional trip abroad to experience the sights, sounds, food, conversation, quality of light and warmth of other countries. To revel in differences and be amazed by similarities. I like to create and to experience, to try and to achieve. And then there are words – read, heard, written at my keyboard, or scrawled on sticky notes, or along the edges of dog-eared supermarket receipts excavated from the unexplored nooks of my handbag. What do I dislike? Cold Snow Bad design Fast food Condescension
View all posts by jingsandthings →
This entry was posted in Historical nuggets, Places of interest, The Seaweed Cage and tagged Alpha Romeo, Dorothy Bruce, James IV, Ladykirk Church, Norham Castle, Scottish Borders, Scottish independence referendum, The Seaweed Cage. Bookmark the permalink.

10 Responses to Jasmine has a red sports car