Posted on January 19, 2014 by jingsandthings

Madeira is a volcanic island, so no golden beaches (well, there is one), unlike The Canaries which have imported tons of sand from the Sahara to please its visitors. Most beaches, where they exist, appear to be dark shingle or larger rocks, so Madeira attracts visitors who want a bit of sun but who are also keen to explore.

So exploring is what we did. As well as the trip by cable car to Monte we took the east tour, the west tour and the trip to Nuns’ Valley in the central area. 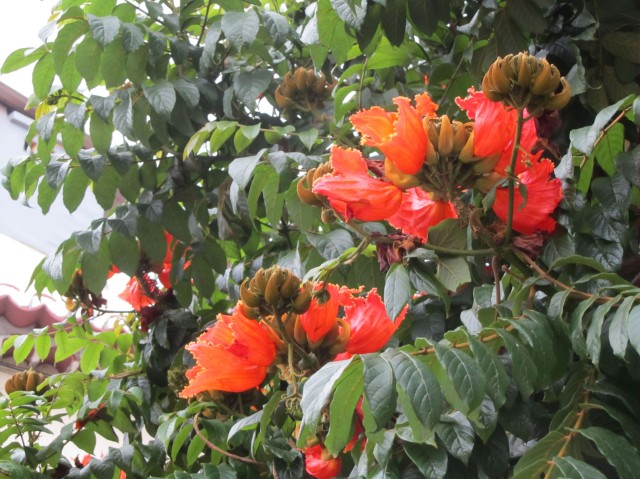 A trees with wonderful poppy-like flowers in December. Sadly I can’t remember its name. Anyone know?

Because of the mountainous terrain Madeira is wetter than The Canaries, with the north receiving more rain and being cooler than the south which is sheltered by the mountains. With temperatures that mostly remain in the mid twenty degrees in summer and around the mid teens to twenties in the winter, and as it rains during much of the year, Madeira avoids scorched landscapes in favour of lush ones. The rain mostly amounts to a few light, passing showers, but December being the wettest month it was common to see people wearing all types of outfits from work gear to casual to dressy, all with a snazzy umbrella tucked under an arm. 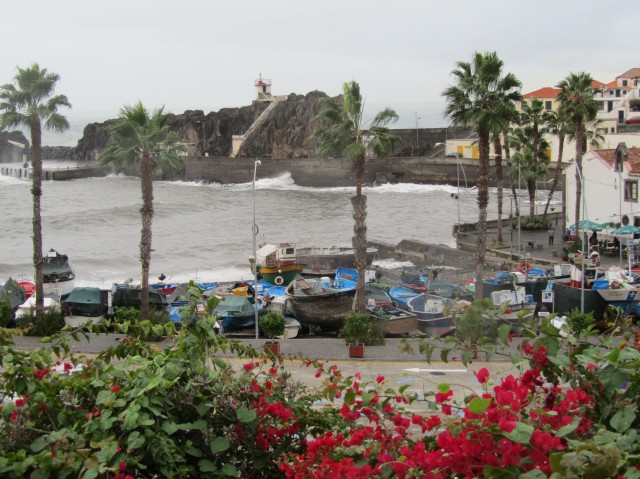 Camara de Lobos, a village near Funchal where Winston Churchill painted whilst staying in Madeira in 1950.

The diversity of scenery gives the island great appeal. Within a short time you can travel from the shore to six thousand feet up in the mountains, winding your way along narrow roads where hairpin bends and sheer drops are the norm, through changes in vegetation and weather, into the grandeur of the mountains. 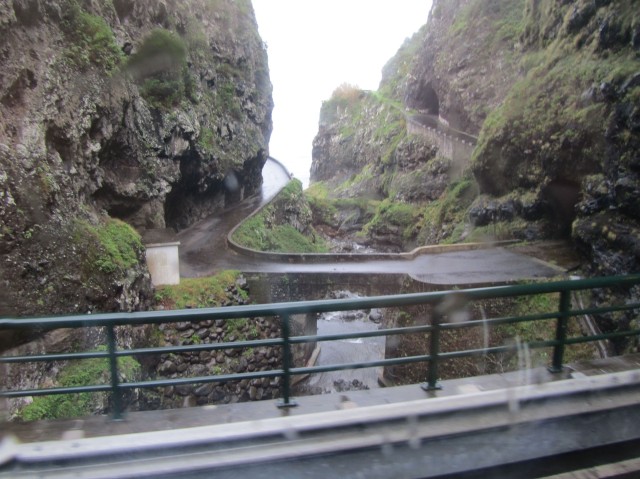 Tortuous roads snaking through the countryside. 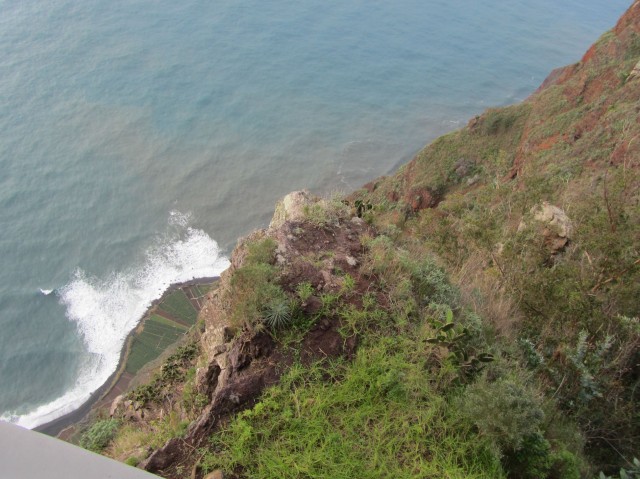 Standing 580 metres (1900 feet) above sea level on Madeira’s highest cliff where we could stand on a glass platform and peer down through it to the rocks and sea below. If you look very closely you can just make out the land along the shore divided into narrow strips.

On the west tour we lunched in a restaurant at Cachalote, an old whaling station where the rocks were so jagged and forbidding it was difficult to imagine boats venturing anywhere near it. 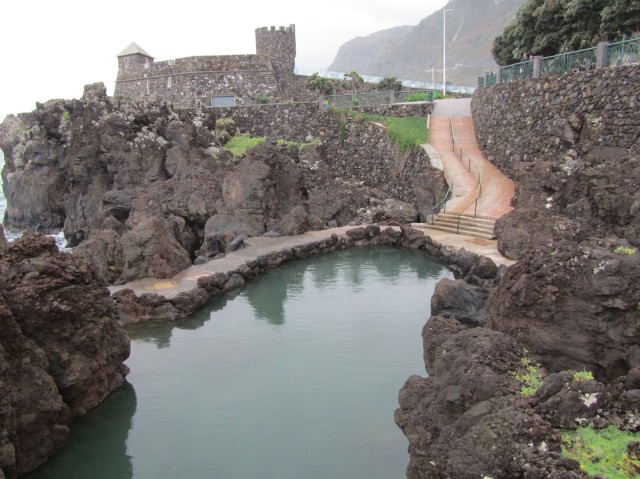 Difficult to believe whaling ships could come near this shore.

Another village on the north coast huddled in the mist by the Atlantic waters, backed by a sheer rockface. 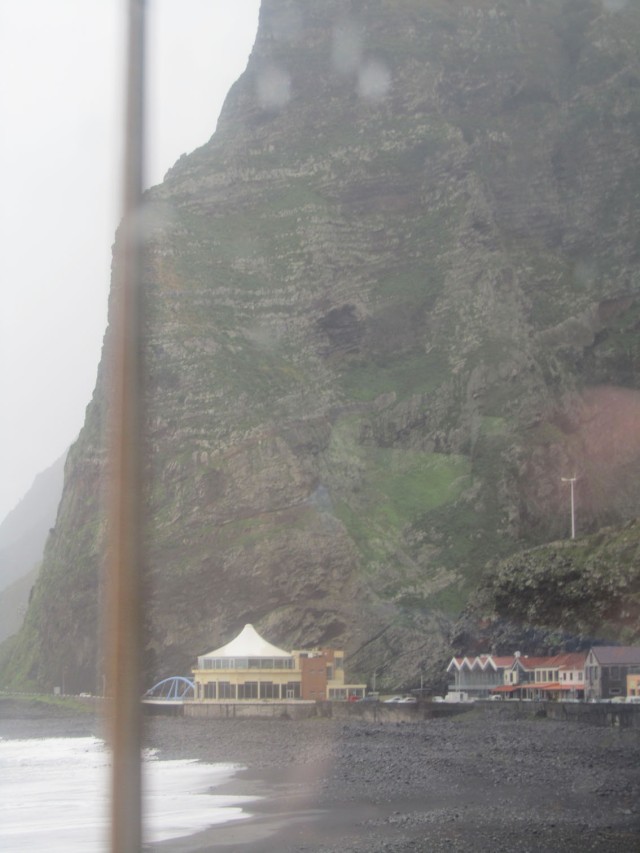 I couldn’t resist taking this through the window of the bus as the situation of the village was so dramatic.

It amazed us to see the narrow strips of land, terraced up mountainsides, on which grapes for Madeira wine, and the produce sold in the Funchal market and elsewhere, were grown. 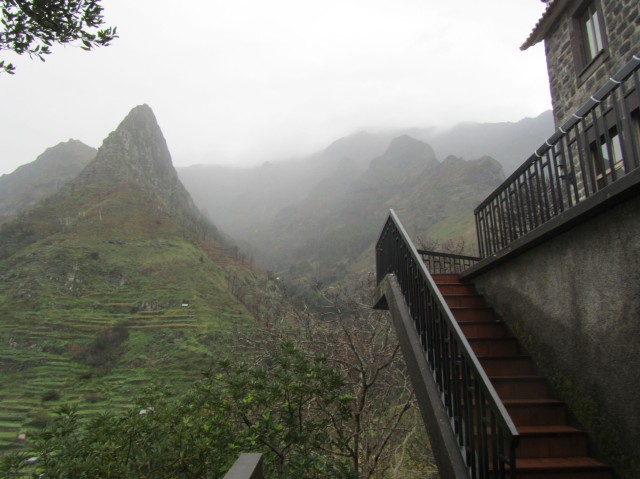 The mist gave the mountains an eerie, dream-like, or film-like quality.

Farmers can own strips scattered over a wide area, and because of the terrain these have to be worked by hand with no mechanisation, or transportation between them other than legs and feet. This is not unlike the runrig system in use in Scotland hundreds of years ago before modern methods of farming were introduced. 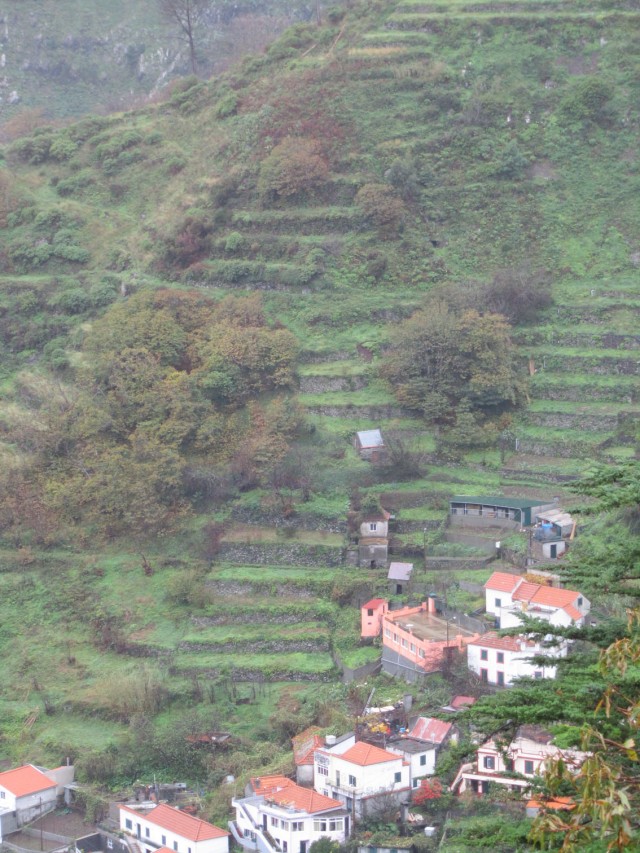 The terraced hillside rose from Vereda da Pousada dos Vinhaticos where we stopped for a comfort break. 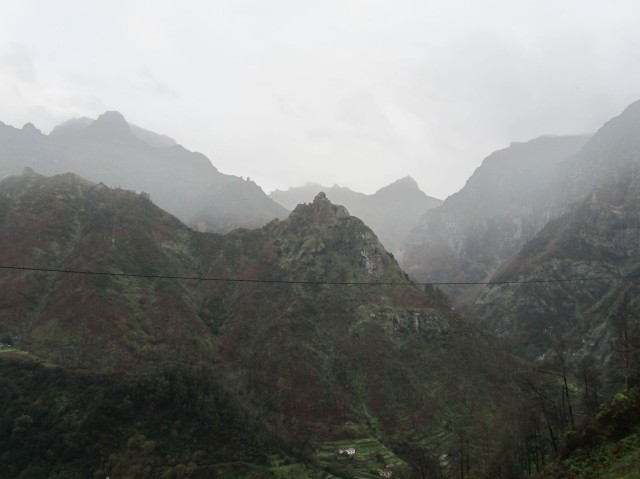 For our east tour we were lucky to have a day of wonderful weather even at six thousand feet up in the mountains. Blue sky contrasted with dark rocks and the only sound was the pipes of the Andes musicians who looked eminently at home amongst the peaks. 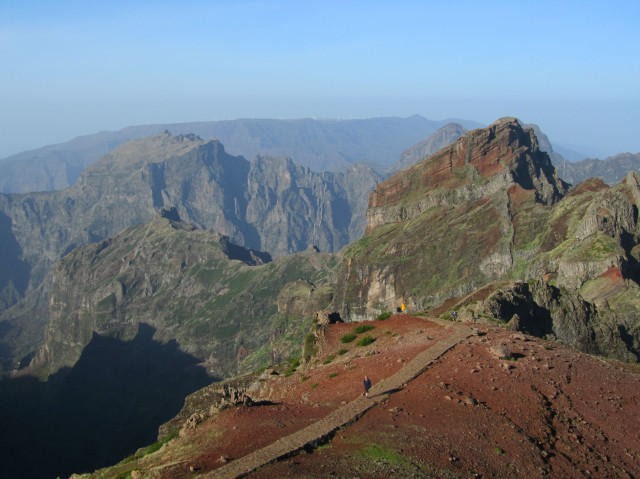 View from Pico do Arieiro, the highest point on Madeira, 1810 metres (just short of 6000 feet) above sea level. 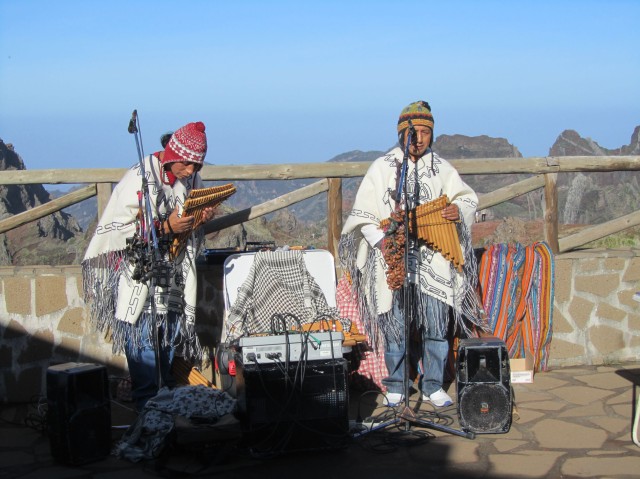 Even the guys from the Andes looked (and sounded) at home here.

Deep in the Nuns’ Valley is a well-hidden village where, at some point in history, nuns from Funchal took refuge from marauding invaders. The only way to reach the village was on foot, but today it is accessed by roads that cling to mountainsides. Then from the village in the shadow of the mountains we snaked upwards, barely managing to pass cement lorries and refuse vehicles, all the time keeping an eye on the sheer drop on one side of the road and the solid rock rising up on the other. 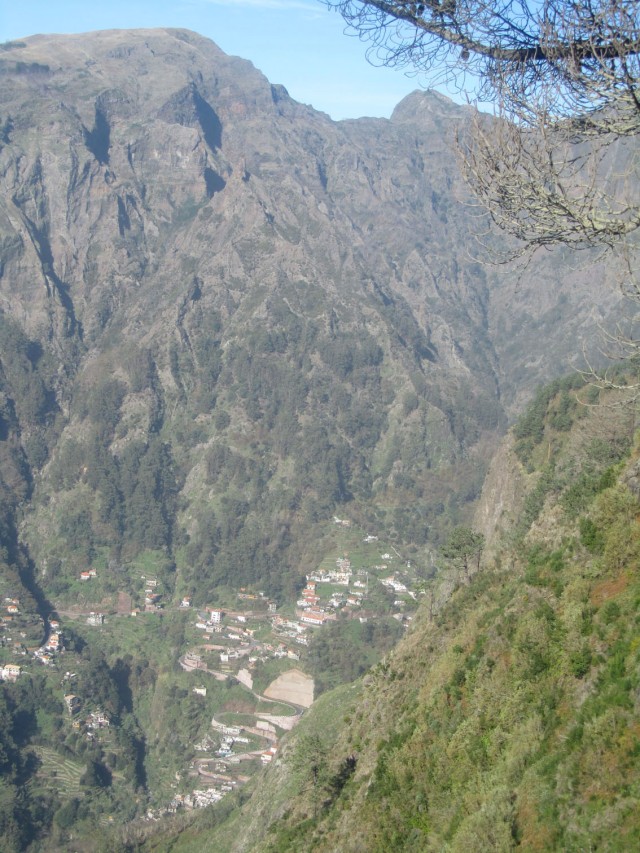 We drove from there up to here and continued higher.

Eventually the road widened and we found ourselves in a parking area at Eira do Serrado. 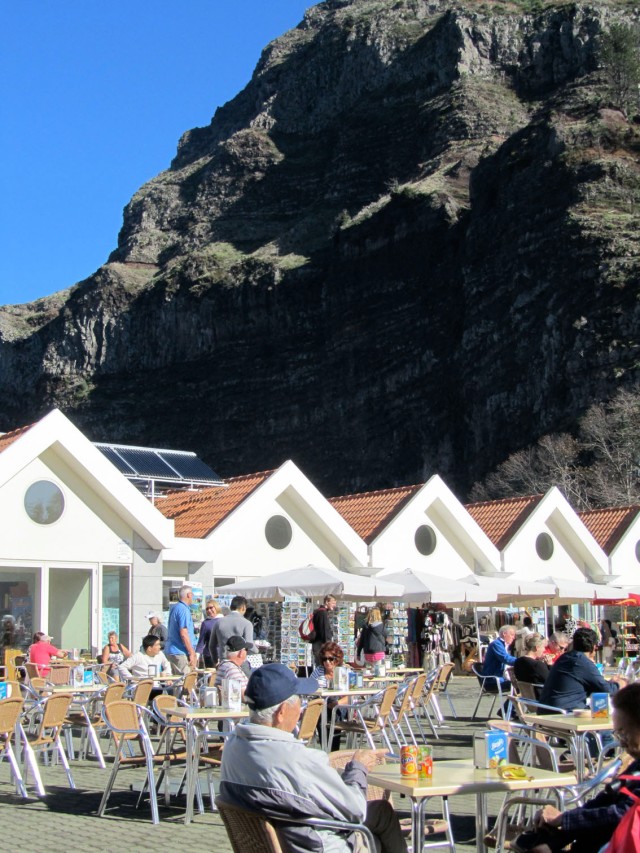 Eira do Serrado, 1094 metres (nearly 3,600 feet) above sea level. The weather was warm and sunny with very good visibility.

The trip was nicely rounded off by a visit to D’Oliveiras wine lodge in Funchal where we tasted three different Madeiras and returned to our hotel in a merry mood. 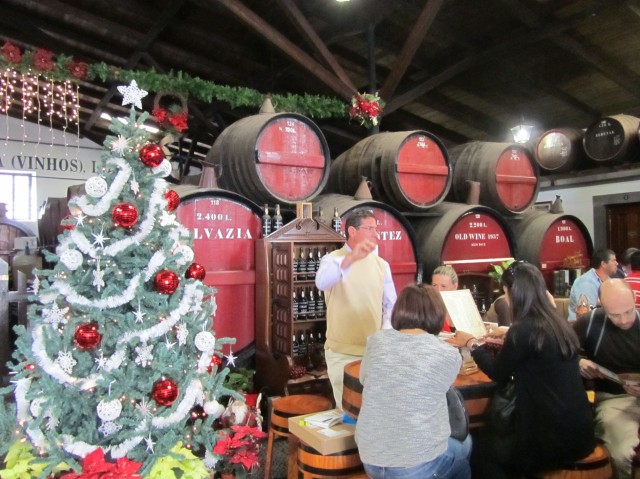 I am me. What do I like? Colour Shapes Textures Paintings, photographs, sculptures, woven tapestries, wonderful materials. The love of materials probably comes from my father who was a textile buyer, and I grew up hearing the names of mills and manufacturers which sounded magical and enticing. Glass in all its soft and vibrant colours and flowing shapes, even sixties glass which makes its own proud statement. A book I can immerse myself in. Meals with family or friends with lots of chat and laughter (and probably a bottle or two of wine). The occasional trip abroad to experience the sights, sounds, food, conversation, quality of light and warmth of other countries. To revel in differences and be amazed by similarities. I like to create and to experience, to try and to achieve. And then there are words – read, heard, written at my keyboard, or scrawled on sticky notes, or along the edges of dog-eared supermarket receipts excavated from the unexplored nooks of my handbag. What do I dislike? Cold Snow Bad design Fast food Condescension
View all posts by jingsandthings →
This entry was posted in Places of interest and tagged Camara de Lobos, Churchill, levadas, Madeira, Nuns' Valley. Bookmark the permalink.