Posted on October 23, 2013 by jingsandthings

When putting together the presentation for the launch of my book In the Wake of the Coup, I mentioned in a slide that increased apathy, and the rise of people no longer voting in elections, had been one of the sparks that sent my thoughts whirring.

Apathy and my feelings about it required a photograph. But what image to use? Then it hit me. On my computer, amongst other old family photographs, I have one of my grandmother with her colleagues, all of whom worked in the postal service during the First World War.

My grandmother was quite a suffragette in her own way, and although she always had my grandfather’s slippers heating by the range fire when he returned home from work on a cold winter evening, and his meal on the table as soon as his hands were washed, her children were in little doubt as to the role she played within the wider family. A woman who never had much, yet always had something to spare for others, she was the saviour to whom family and friends turned when in need of help or advice. Having supported the campaign for votes for women, she never failed to use her vote, and instilled into me at a young age the value of mine. 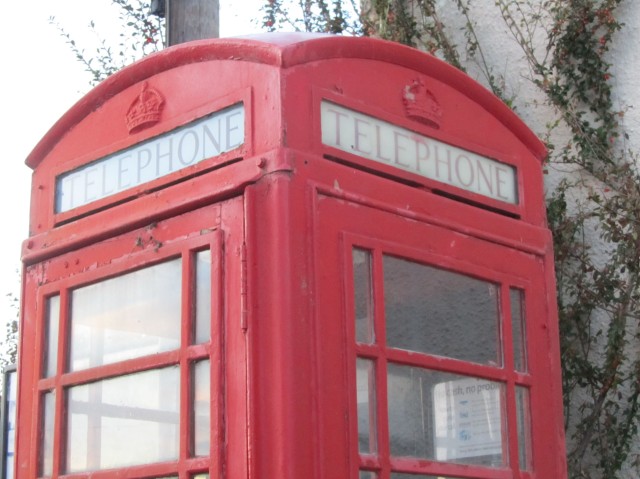 The red phone boxes which were once so numerous in our towns, cities and rural areas have all been replaced except for a few, left because they fit better with their more .traditional surroundings

In the UK before 1914, Post Office communications – holiday postcards, letters and parcels, the telegraph and telephone — were vital to businesses and everyday life. The Post Office was one of the largest businesses in the world. With the outbreak of war it additionally provided a link between those fighting at the fronts and their loved ones at home.

A post box from the reign of George V!, father to the present queen.

During the war married women were recruited to take the places of men away fighting, keeping vital postal services running. After the war most of these women lost their jobs. However their time in the workplace had added strength to the growing demand for equal rights for women and for the vote.

On the outbreak of the First World War my grandmother had three young children. In days before childcare or nurseries I wonder who looked after them. Two of her brothers died during the war and one died later as a result of his injuries, so it must have been a difficult time for her family, as it was for so many others. 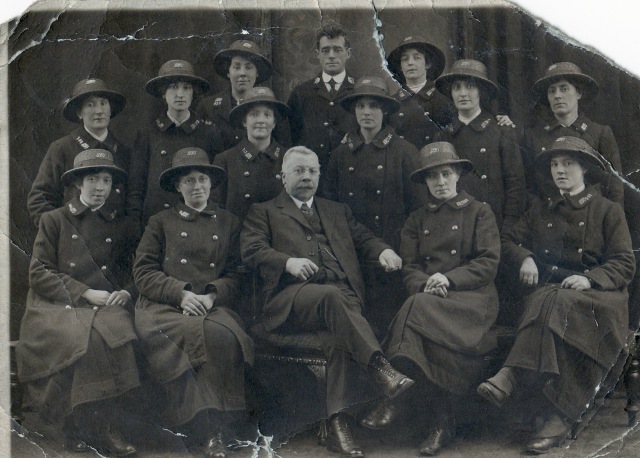 My grandmother is standing behind and to the left of the guy sitting in the front row.

In the UK last week the postal service my grandmother worked for all those years ago was privatised. The Royal Mail has been sold off and its shares floated on the Stock Exchange, much to the joy of some, the disappointment of others and the concern of many people who live in rural areas and the remoter parts of the country.

The apathy that sparked the idea for my book remains, indeed grows. In the UK’s first past the post voting system it is now only voters who live in a few swing constituencies whose votes decide which party forms the government.

The Post Office in the small Berwickshire village of Coldingham, in the Scottish Borders.

If she were still alive, I am certain my grandmother would feel disappointed that the votes of such a small number of people determine the ruling party, policies whose consequences we all live with (such as the privatisation of the postal service), and its channelling of the way we live our lives. And I can almost see her now, rolling up her sleeves, jabbing hairpins back into her hair and wondering who she can enlist in a campaign to make the votes she worked for, the people casting them and those who feel excluded or apathetic about the political system, count again.

I am me. What do I like? Colour Shapes Textures Paintings, photographs, sculptures, woven tapestries, wonderful materials. The love of materials probably comes from my father who was a textile buyer, and I grew up hearing the names of mills and manufacturers which sounded magical and enticing. Glass in all its soft and vibrant colours and flowing shapes, even sixties glass which makes its own proud statement. A book I can immerse myself in. Meals with family or friends with lots of chat and laughter (and probably a bottle or two of wine). The occasional trip abroad to experience the sights, sounds, food, conversation, quality of light and warmth of other countries. To revel in differences and be amazed by similarities. I like to create and to experience, to try and to achieve. And then there are words – read, heard, written at my keyboard, or scrawled on sticky notes, or along the edges of dog-eared supermarket receipts excavated from the unexplored nooks of my handbag. What do I dislike? Cold Snow Bad design Fast food Condescension
View all posts by jingsandthings →
This entry was posted in In the Wake of the Coup and tagged Dorothy Bruce, electoral apathy, In the Wake of the Coup, Post Office, Scottish Borders, women's votes. Bookmark the permalink.

2 Responses to Posties and votes