Of water to beyond

Castle Garden of Water to Beyond

A castle has stood on this site at Cramond since medieval times, but after its almost total destruction it was rebuilt in 1590 and later extended. 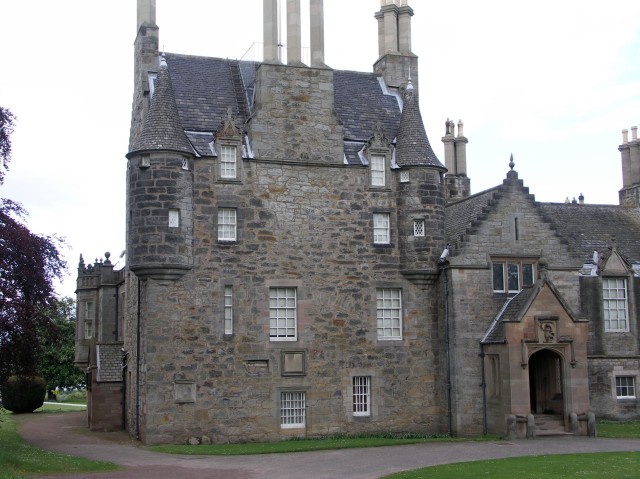 The last private owner of Lauriston Castle was William Reid who purchased it at the beginning of the 20th century. Reid owned a highly regarded cabinet making business in Edinburgh and he and his wife installed modern amenities and filled the building with fine furniture and artworks.

The castle is now in the care of the City of Edinburgh and, as it remains as it was on Mrs Reid’s death in 1926, gives a fascinating glimpse into upper class Edwardian life in a country house in Scotland. 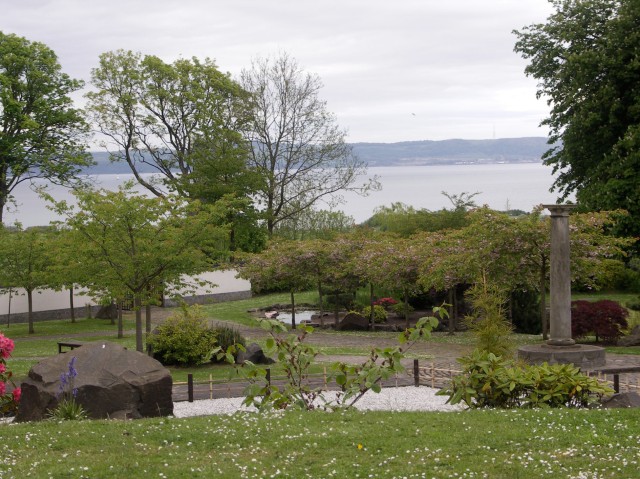 Lauriston Castle grounds looking out over the Firth of Forth

The extensive grounds, which contain a bluebell wood and three croquet lawns, look out over the Firth of Forth. In more recent times (2002) the garden saw a new addition – a Japanese garden built by Takashi Sawano. The Edinburgh-Kyoto Friendship Garden is called the Castle Garden of Water to Beyond.

Water and shrubs at the Edinburgh-Kyoto Friendship Garden 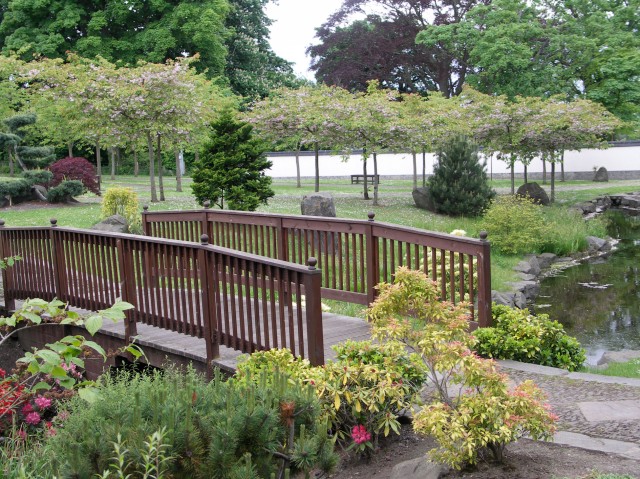 Many Japanese trees and shrubs fare well in Scottish gardens, as do those from the Himalayas, so the little taster of Japan with its water, raked gravel, standing stones and stone lanterns, wooden bridge and benches, cherry blossom and careful planting of shrubs and greenery sits well in its setting by the old castle and the Forth. 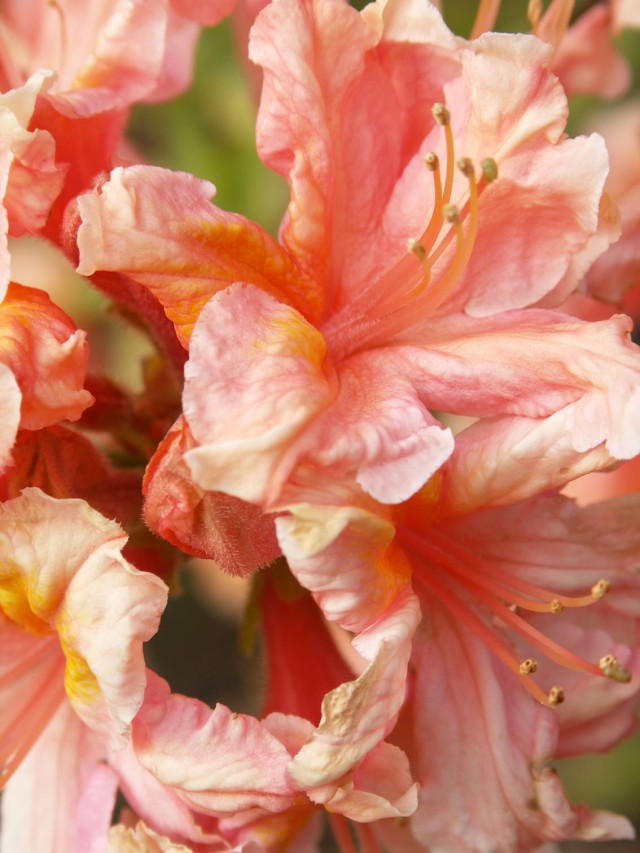 A blast of apricot to catch the eye 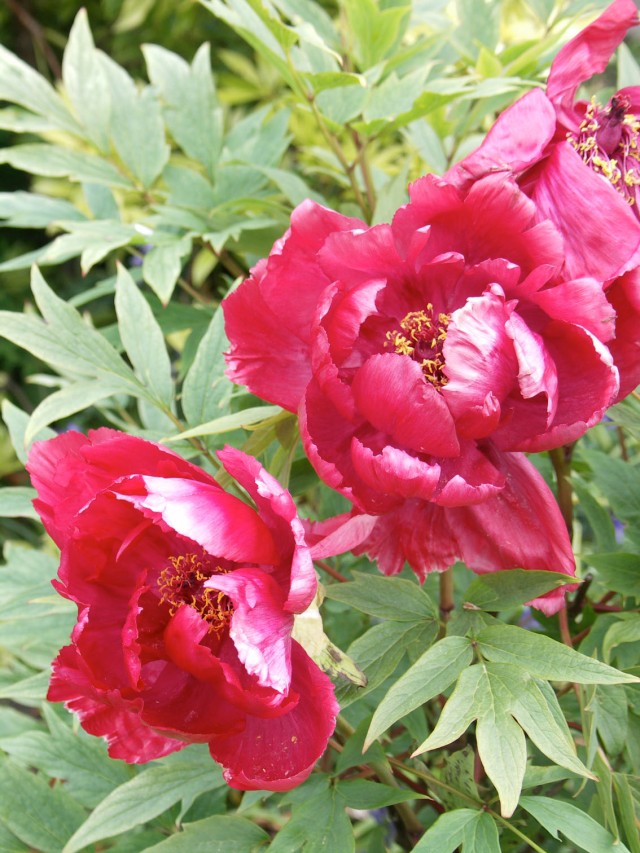 Peonies adding a splash of colour and exoticism. 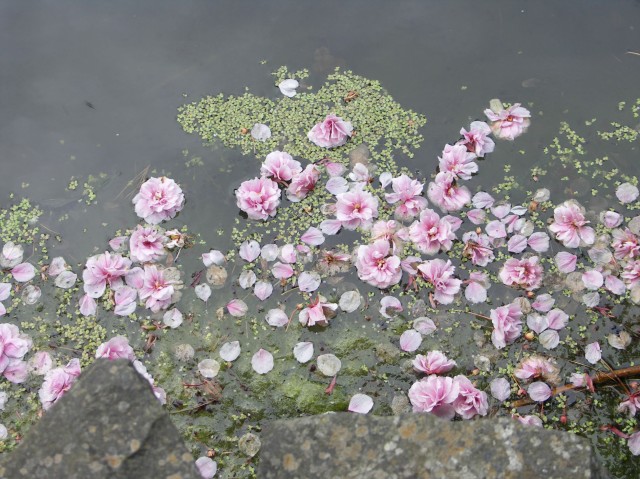 Cherry blossom floating in water as if mirroring the trees in the pond. 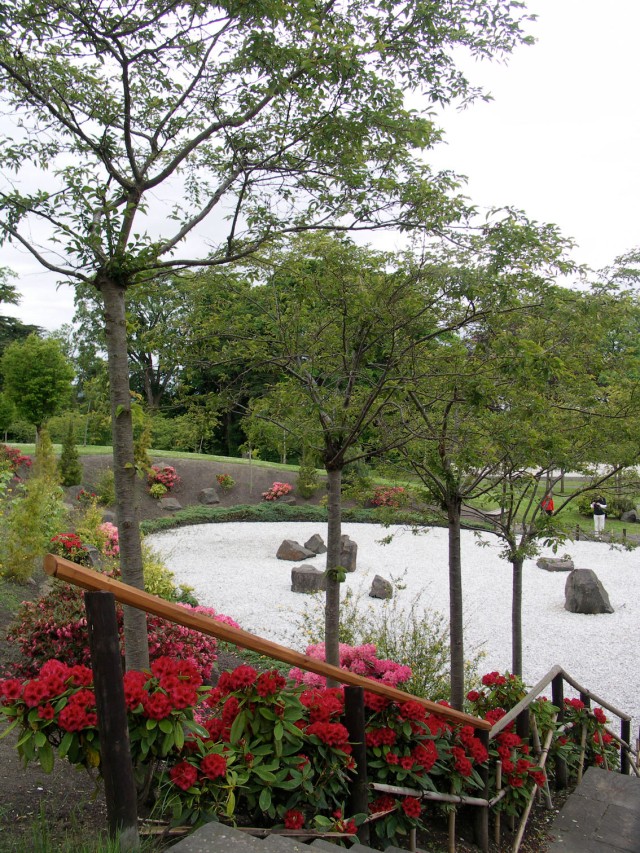 Looking over the gravel garden.

I am me. What do I like? Colour Shapes Textures Paintings, photographs, sculptures, woven tapestries, wonderful materials. The love of materials probably comes from my father who was a textile buyer, and I grew up hearing the names of mills and manufacturers which sounded magical and enticing. Glass in all its soft and vibrant colours and flowing shapes, even sixties glass which makes its own proud statement. A book I can immerse myself in. Meals with family or friends with lots of chat and laughter (and probably a bottle or two of wine). The occasional trip abroad to experience the sights, sounds, food, conversation, quality of light and warmth of other countries. To revel in differences and be amazed by similarities. I like to create and to experience, to try and to achieve. And then there are words – read, heard, written at my keyboard, or scrawled on sticky notes, or along the edges of dog-eared supermarket receipts excavated from the unexplored nooks of my handbag. What do I dislike? Cold Snow Bad design Fast food Condescension
View all posts by jingsandthings →
This entry was posted in The environment and tagged designed landscpes, Edinburgh, gardens, Japanese-Kyoto Friendship garden, Lauriston Castle, takashi sawano. Bookmark the permalink.

15 Responses to Of water to beyond