Drive to the gallery

It’s Sunday and there are blinks of sun between the clouds. The temperature has at long last risen but the wind is whipping branches into a waltz and spinning the clumps of daffodil buds.

Good to get out, but good to be able to shelter from the wind as well. So without checking what is on we decide on a trip to the Gallery of Modern Art in Edinburgh. Seeing paintings invariably cheers and inspires us.

Our route takes us over Dun Law where a wind farm has been constructed. 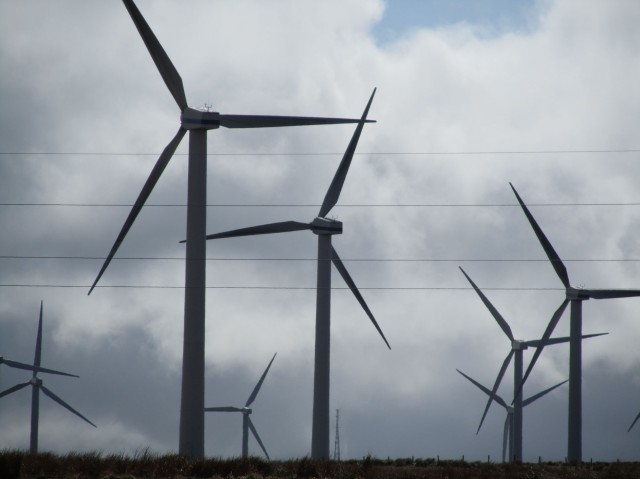 Across Scotland there are those who object to these intrusions on the landscape, but I rather like our clean, green energy wind turbines waving their arms in welcome on many of our barren moorlands.

Dun Law gives way to Soutra, the 1200 foot rampart that divides the Borders from Midlothian. To our left is Soutra Aisle, all that remains of a hospital founded in 1164 near to the Via Regia, the main route from Edinburgh to the Border Abbeys and the south. Known as the House of the Holy Trinity, the hospital complex was run by the Augustinian Order and is said to have been the largest and best endowed hospital of mediaeval Scotland. 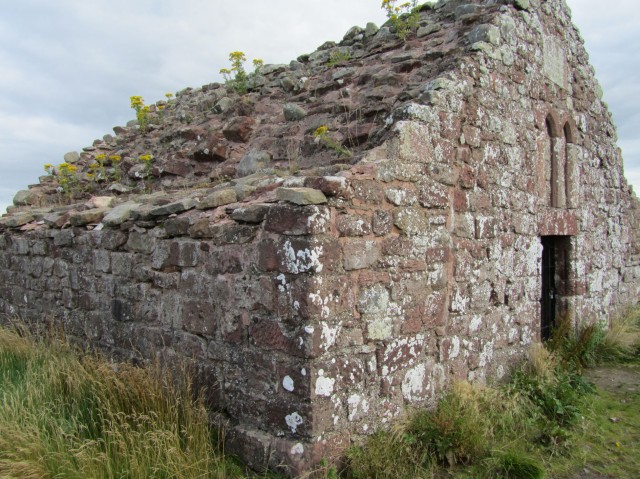 Soutra Aisle is just a fragment of the church, surviving as it became the family burial vault of the Pringles of Soutra in 1686.

As well as looking after the sick, travellers and pilgrims were also welcomed. In recent years archaeological investigations have uncovered much fascinating information on medieval life and medicines. 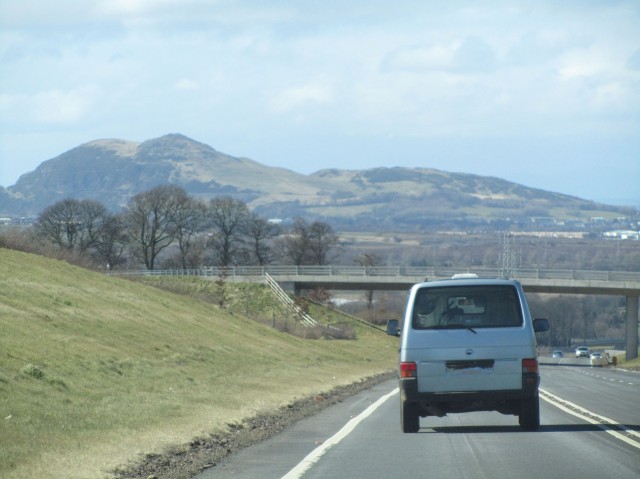 From the Edinburgh Ring Road, Arthur’s Seat, the main peak of the group of hills that form most of Holyrood Park, can be seen. I couldn’t resist taking a photo through the car windscreen.

The Scottish National Gallery of Modern Art moved to its present building in 1984. The neo-classical building, which dates from 1825 was formerly John Watson’s School, an institution for fatherless children.

Everything is going to be alright. Wonder if this is what the fatherless children who used to live here were told?

The exhibition that is running until the autumn was on death – not quite the cheerful stuff we had looked forward to. So the grounds drew us. 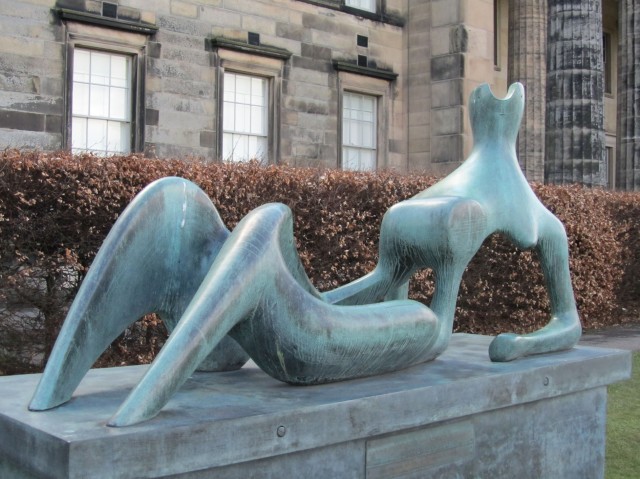 One of Henry Moore’s reclining women. I’ve always loved HM’s sculptures. There’s something very tactile and compelling about them. 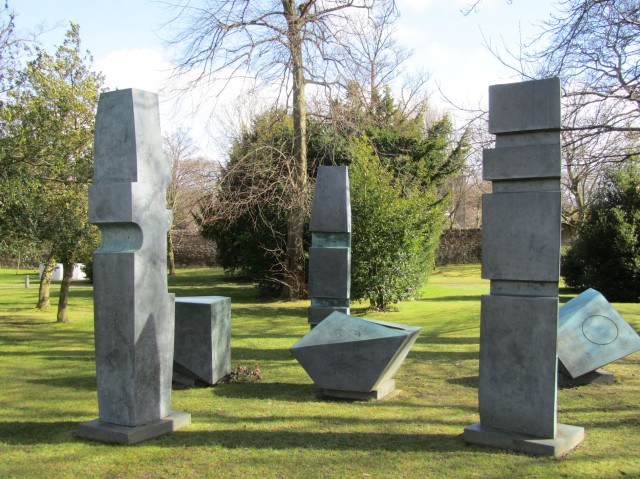 Too windy to investigate what this was called or who it was by, but it looks good in the grounds.

The grounds around the building play host to numerous sculptures as well as the imposing Landform Ueda, a landscaped design by architect Charles Jencks, inspired by chaos theory and shapes found in nature.

Interesting shape. Wonder what it is?

Giant metal container gone wrong. My attempts at pottery ended rather like this

Landform Ueda, designed by Charles Jencks, a wonderful land sculpture that sits in front of the gallery. In the background is Scottish National Gallery of Modern Art Two which I wrote about previously.

Despite its proximity to the city centre the gallery grounds lead onto The Water of Leith Walkway, a beautiful thirteen mile walk through the heart of Edinburgh along the banks of the waterway. A number of works by sculptor Antony Gormley can be seen here, but too late for that today. 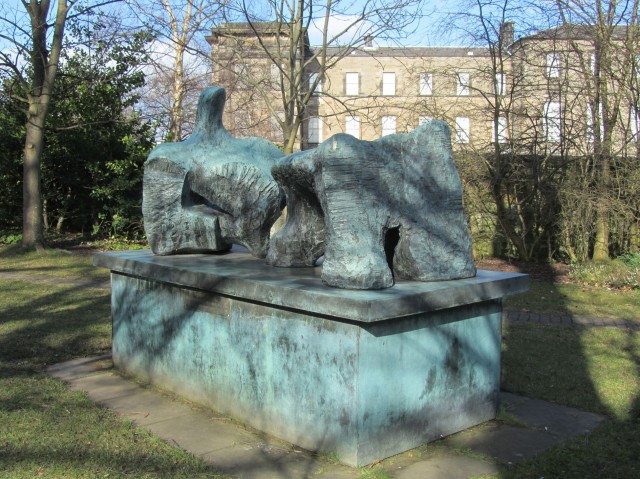 Another reclining woman on the Water of Leith Walkway. Not as smooth and tactile as the previous one but fabulous all the same.

Driving back through the centre of Edinburgh I managed to get a shot of some of the New Town’s buildings with their wrought iron balconies.

Centre of Edinburgh houses with their wrought iron balconies. Most are Georgian, but these look as if the might be slightly later.

Further on in an area formerly dominated by a brewery (both in sight and smell) much new housing is being built alongside Lochrin Basin, the resited terminus of the Union Canal that runs from Falkirk to Edinburgh.

Narrow boats in the Lochrin Basin of the Union Canal in the centre of Edinburgh.

Built in 1822 to bring coal to Edinburgh, the canal has undergone significant restoration and is now used for recreation. The narrow boats add a splash of colour.

Narrow boats add a splash of colour to the Lochrin Basin of the Union Canal. The new buildings of central Edinburgh can be seen around the restored waterway.

And to top off a pleasant, if windy, day as we neared home I managed to get a shot of a lamb, one of the first I’ve seen this cold, dull spring. Cute wee thing!

Cute wee lamb born into a cold spring in the Scottish Borders.

I am me. What do I like? Colour Shapes Textures Paintings, photographs, sculptures, woven tapestries, wonderful materials. The love of materials probably comes from my father who was a textile buyer, and I grew up hearing the names of mills and manufacturers which sounded magical and enticing. Glass in all its soft and vibrant colours and flowing shapes, even sixties glass which makes its own proud statement. A book I can immerse myself in. Meals with family or friends with lots of chat and laughter (and probably a bottle or two of wine). The occasional trip abroad to experience the sights, sounds, food, conversation, quality of light and warmth of other countries. To revel in differences and be amazed by similarities. I like to create and to experience, to try and to achieve. And then there are words – read, heard, written at my keyboard, or scrawled on sticky notes, or along the edges of dog-eared supermarket receipts excavated from the unexplored nooks of my handbag. What do I dislike? Cold Snow Bad design Fast food Condescension
View all posts by jingsandthings →
This entry was posted in Places of interest and tagged Charles Jencks, creativity, Dun Law Windfarm, Landform Ueda, Lochrin Basin Edinburgh, narrow boats, Scottish Borders, Scottish National Gallery of Modern Art, Soutra Aisle, Union Canal, Water of Leith Walkway. Henry Moore. Bookmark the permalink.

10 Responses to Drive to the gallery